Reyka wrap-up: see it all on DStv 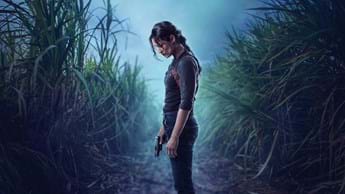 If you blinked, you just might have missed it because that’s how fast the past 8 weeks have flown by since the debut of Africa Original Crime drama Reyka on M-Net (DStv channel 101).

If waiting a week between each episode as the mystery spun out about the main character Reyka Gama (Kim Engelbrecht), a criminal profiler who was investigating a serial killer who killed women in the sugar cane fields of KwaZulu-Natal and her past as a kidnapping victim, proved too much for your nails, you can now binge it as a Box Set on DStv. Or jump in for a second round to appreciate all those subtle clues hidden through the series.

If you got lost along the way or you were just a casual viewer, though, here is a quick wrap-up of the series – and what South Africa had to say.

If you haven’t watched the show and still want to, don’t read any further! Major spoilers and important plotlines are going to be revealed!

Episode 7 ended on an ugly cliffhanger as the serial killer Reyka and her team of detectives in the South African Police Force had been investigating, captured Reyka – while she was working undercover – and started to strangle her with a torn piece of her own clothing…

Questions lingered when the credits started rolling: did he kill her? How would it all end? In the highly anticipated episode 8, Reyka was clinging to her life as a clearer picture of the cane field serial killer was revealed – it was Zakes (Jabu Mthembu), the foreman and police informant.

As Zakes inspected Reyka’s handbag – a trophy he took from all his victims, and which also gave him sexual gratification – Reyka started to understand this monster better, and she used her criminal profile knowledge to explain to Zakes why he had this unquenchable thirst to murder women.

“I know a lot about you,” Reyka told Zakes. “I know how you do it and how you can’t stop, and I know why you talk so much… You do it to protect yourself, that is what you fear. You are scared of your mother…”

With that revelation, and more was to come during a fight between Reyka and Zakes. An injured Reyka told Zakes that he was molested as a child by his mother’s boyfriend, and when he told his mother about it, she didn’t believe him and beat him with her handbag!

With her gun in hand, she told Zakes, “I could end this right now and no one will know.” But Zakes responded: “If you kill me, you won’t find the other bodies.”

Backtracking to the start of episode 8, in a lengthy flashback scene the truth came out about young Reyka (Gabrielle de Gama) and what happened the day she finally escaped her capturer Angus Speelman (Iain Glen).

While at a Farmers’ Association event, Angus courted Reyka by showering her with affection, giving her an engagement ring and dancing with her. Reyka was smitten, but her whole world came crashing down when she saw a picture of Angus taken at the previous year’s event, showing him holding another young girl. The caption read: “Angus Speelman and daughter Lucy – 1997”.

Yes! That Lucy! The girl Reyka couldn’t quite remember, but that she was certain was also living on Angus’s banana farm where he kept her prisoner.

This upset her immensely, but still Angus consumed her, and that night he raped her. By morning young Reyka fled, injuring Angus as he set after her. And she finally got away from him.

By the end of episode 8 Angus, who got parole in episode 7, had captured Thuli (Rashaan Stackling), Reyka’s daughter, with the help of no one other than Thuli’s au pair Nina (Danel Maree) – who is actually the mysterious Lucy!

It was a race against time, but Reyka found Speelman with Thuli back at the banana farm. He now wanted them all to be the perfect little happy family. With Reyka’s gun aimed at Speelman’s head, she was a breath away from killing him. But in the end, she couldn’t pull the trigger.

There was a gunshot, however. Portia (Nokuthula Mavuso), Angus’s wife who was living with them, shot Lucy with a shotgun. Lucy was holding her own gun and was about to shoot Reyka (who Portia saw as her own daughter), when Portia intervened.

And the season ended with Speelman back in the hands of the police.

This series truly captured viewers’ attention and from the buzz on social media, it has been worth that weekly wait.

Darlene Reddy said on M-Net’s Facebook page: “What a brilliant series… So sad it had to come to an end.”

After this Reyka needs therapy, all night prayer, a cleansing ceremony the whole nine yards!#reykasa pic.twitter.com/GMxFWCsuoj

Not going to lie, I really wanted Sam to be the serial killer 😭💀🤦🏾‍♀️ #ReykaSA pic.twitter.com/iACPVN5MqD

Haven’t caught up on the action> Reyka S1 as a Box Set now on Catch Up.

Reyka S1 aired on M-Net (DStv channel 101) which is available exclusively on DStv Premium. To get DStv Premium or to upgrade your account, click here.