On the road with Homegrown Tastes South Africa 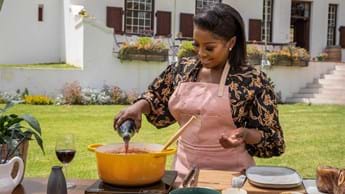 Homegrown Tastes South Africa Season 1 is filling up our gourmet bucket list at a pace! We’ve seen Lorna Maseko sink her face into a kota (push the hair back first, advises her street food guide, artist Karabo Poppy), stroke a zebra, learn to cook venison for the first time, and pick up some potjie secrets, knock back cocktails with Pearl Modiade and more. Wherever she’s gone, she’s turned her curiosity into cooking, whipping up dazzling versions of the dishes she’s learned about to feed her celeb friends.

Throughout Homegrown Tastes South Africa Season 1, we’ll see Lorna trace food journeys from farm to table, across the country, then cook for us in some of SA’s most scenic spots. But the Homegrown Tastes journey began before Lorna even got her first nibble of artisanal sourdough, with the Rapid Blue Production Team, who’ve been with her all the way through her journey. We chatted to them about planning the journey, making things happen and their secret ingredients along the way.

What did you want to show with the dishes Lorna is inspired to create on screen?

Rapid Blue: “We wanted to show that across the country we have producers who are passionate about quality ingredients, and that if we take the time to learn more about where our food comes from, the dishes we make in our own homes can escalate to a fresher new level.”

What were the different phases involved in planning Lorna’s journey around South Africa?

Rapid Blue: “During our development and research phase, we plotted out hero ingredients that are homegrown and worth profiling. We then had to reduce the list to what was going to be in season during our filming window. Then we set about finding contributing producers who had good stories and would be available to film with us. We really were at the mercy of nature as 1 of the farmers had to cancel filming with us 2 days before we were due to visit them due to exceptionally heavy rainfall that put the whole crop in danger. We had to activate our networks and find a new contributor at short notice as we had to leave the area within 2 days.”

How were your different farms, chefs and celebrities selected?

Rapid Blue: “We identified producers, chefs and celebrities in the planning phase that we felt really helped to reflect the area and the food culture. It was important that our connections were authentic, and their stories were interesting. We set about the logistical planning, and we managed to schedule around most conflicts to get the ideal cast.”

How did recipe testing work for the show?

Rapid Blue: “Lorna worked with our Culinary Producer Carolina “Caro” Alberts (the star and creator of Koskaskenades and a consultant on numerous cooking shows including Siba’s Table Season 2 and Jenny and Reza’s Fabulous Food Academy) to brainstorm and develop the recipes that would showcase the hero ingredients. Once Lorna was satisfied that the recipe and plating was exactly the way she envisaged, they formalised the methods and ingredients for the hero cook. She also assisted the Chef who did our demo as often this was their first appearance on TV. (Having Caro on set allowed Lorna to bounce back and forth if recipe quantities seemed “off” while she was filming.”

How did you pick your backdrops for the live cooking segments?

Rapid Blue: “We always wanted to highlight the area we had travelled to for the episode, so we chose areas close to our characters and the environments we were in (outdoor cooking presents practical challenges. Some ingredients like spinach were filmed on table looking gorgeous, then plunged into an ice bath the moment they were off camera so they didn’t wilt on screen from the heat).”

What did you travel with in terms of ingredients and what did you source at locations?

Rapid Blue: “We sourced all our Hero ingredients and fresh items in the area we filmed and cooked in. Our staples and dry goods travelled with us in the culinary van.”

Did the show travel with its own “kitchen” full of cooking utensils, dishes, pots, presentation items, glasses etc?

Rapid Blue: “We had Lorna’s mobile kitchen bench (complete with hand wash station) and all the equipment travelling with us from town to town in the Culinary Van. We were lucky that it was only some of our beautiful set glassware that didn’t make it due to some bumpy roads. But we had enough other items that filled the gaps.”2

What did you run out of?

Rapid Blue: “We ALMOST ran out of dry ice whilst making the ice cream on the rooftop of the fine dining episode (Episode 3), but new stock arrived just in time!”

Who was in charge of behind-the-scenes basic ingredients preparation for the show?

Rapid Blue: “Boitumelo (Magale) was our Sous Chef on set, and she helped to prep under the direction of Lorna and the Culinary Producer.”

How did you travel? Was this 1 long roadtrip or did you fly certain sections?

Rapid Blue: “We did some episodes around Joburg and returned to base each night or did some short overnight stays in the Northwest. Then we hit the road and covered the rest in a large loop. We always drove with the Culinary Van, Production Equipment Van and the Hero Car. The rest of the team flew where possible.”

What was the longest the production team travelled in one day?

Rapid Blue: “Our longest travel day was probably when the road team drove from Joburg to Graaf-Reinet. They drove with the Culinary Van, Production Equipment Van and the Hero Car.”

Who was in charge of keeping the crew fed and how did that happen?

Rapid Blue: “The production team made sure that we always had the team fed on set. So, this meant having large hot and cold boxes in the Production Van for our snacks and drinks. Then we tried to support smaller restaurants in the areas we were in for our other meals.”

What are some of the fun numbers from this series?

Rapid Blue: “The Hero Car for the show travelled just over 11,000 kilometres on the journey across the country. The Production team used over 200 Gigs of data while on filming and working on the road. Our cast and crew had a total of 665 breakfasts in the filming phase.”

What was your most fun day making Homegrown Tastes South Africa?

Rapid Blue: “The morning we all woke up early to meet the fishermen coming into Hout Bay harbour with the catch was so exhilarating. We had to shelter behind some of the trucks to stay out the wind and avoid the smashing waves as we waited to hear from the Skipper when the boat would be safe to approach. Eventually we got the word there was a gap in the weather and they were coming in to dock. Before we knew it there was a hive of activity as forklifts, trucks, ice packers arrived at the dock to offload. We really felt that we were seeing the front lines of the harvest.”

BBC Lifestyle (DStv Channel 174) is available on DStv Premium, Compact Plus and Compact. To upgrade your existing package, click here. Or if you'd like to Get DStv, find a service that suits your needs here.