Under the sea with Gyimah Gariba of Big Blue

Big Blue creator Gyimah Gariba talks about his favourite sea creatures, basing characters on his siblings, and creating the underwater world of his dreams 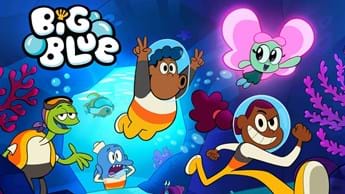 In the new animated children’s series Big Blue, Captain Lettie and the crew of the Calypso are on an ocean mission to save the seas from pollution, help the creatures they meet along their way, and explore the depths… for science! The series is Ghanaian-born Canadian animator Gyimah Gariba’s love letter to 2 things that sustained him as a kid – the fantastical and magical escape into his imagination that watching TV gave him, and the natural world itself, which was the place that sustained and grew him and helped him to connect to other children.

Read on as he talks about these influences and how they shaped the design of the show and the stories that he and his team tell in Big Blue.

And remember, your kids will meet some of their favourite characters when they play and learn with DStv Island Adventures, free to all parents via the MyDStv app.

Read about Island Adventures Get the MyDStv App now

Under the sea with Gyimah

Growing up, what was your relationship with the natural world and how is that reflected in Big Blue?

“I grew up in West Africa, Ghana, which is right on the equator. So, we have really beautiful weather all year round. My relationship with the natural world was that is where you go to get your “fuel”. We'd be cooped up inside in class all day, and then the second half of the day up until the evening was our opportunity to reclaim our time in nature. I found during those times I was playing football and those times really helped me, especially because I'm a kid who was introverted. I like to draw, I've always liked to draw, which is seated at a desk. But playing outside with my friends and my family, it was 1 of the things that really helped me explore my personality and grow as a person. It's also one of the things that inspired Big Blue, because a lot of the times when I was playing outside, those were the heights of my relationships with people and my time spent socialising. But the 1 thing that was in our way, all the time, was always pollution. We had to spend a little extra time cleaning up the football pitch before we played, or we had to make sure that when we were boogie boarding or surfing, that there weren't plastic bags in our face. If I could alter that, from my experience growing up, I would have altered it, because those were the memories of my life, you know? That's part of what Big Blue was about.”

1 of Big Blue’s characters, Lemo, is a scientist. What kind of research did you do on the underwater world for him?

“Lemo was inspired by my brother. And we were lucky enough to have an expert named Boris Worm (yes, his actual name, he’s a marine ecologist) on the production, who would give us fun tips about animals that we could use in the show. As much as the show isn't really a scientific show, like we have a dolphin in a hat, which I don’t think is scientifically accurate, he was he was really helpful in bringing to our attention, how many things are actually pretty fantastical about the underwater world, so that hopefully 1 day some kids will do some Googling for themselves, and realise that half the things we made up, and half of the things are actually true!”

What are some of your favourite sea creatures that you included in the show?

“Sea Spiders are a fun thing to explore. And there's an episode about Sea Pigs (a kind of deep-sea sea cucumber), which I thought were really interesting. They're kind of cute, but also kind of parasitic, which is an interesting juxtaposition. And Lionfish are pretty cool. We have a character named Leah Lionfish, and a lot of exploration was done about Lionfish and how genuinely poisonous they can be.”

What are some of your favourite wacky ocean facts?

“I really like the dolphin facts. I think dolphins have a lot of interesting biological specifics that help them to manoeuvre and see the world in different ways. Like how dolphins can hear pregnancies long before human scanners can pick them up. And just sounds underwater, like whales’ songs and how they're catered to each other. Some of the things that we take for granted, as just the beauty of the natural world, actually hold scientific weight, and it’s part of the mystery of the planet. And I really, really love researching for Big Blue… and then ignoring it, and making some wacky, cartoony example of the things that I found out. So, it is really fun, right?”

You got to create your own underwater cities! What influenced those design choices?

“It was just dreaming about an underwater world. Whenever you see those ocean documentaries, the cameras pan underneath all of these ocean rocks, volcanic rocks. And 1 of my hopes, my entire life, was to be watching those documentaries and have them reveal a lost city of underwater mermaids or Atlantis or things like that. So, this was a real opportunity to delve into the potential of that, and really let your imagination run wild. I graduated with a very incredible background designer named Lee Ann Dufour, who came from the same college that I went to, Sheridan College, and she was the location designer on the show. We would have a lot of good chats about what was possible in our fantasy imaginations of this world, and she had the incredible draughtsmanship skills to draw it up. So, she came up with sandcastle castles, she came up with coral cities, she came up with some of the most amazing ideas and even for the futuristic elements. She designed what that would look like in a retro-futuristic, 2001 Space Odyssey, kind of way. And the whole ship, the Calypso, has its own design thinking behind it. It was a lot of fun.”

What shaped your character design?

“For Big Blue we were going for something that was a lot sillier, a lot more fun. It's reflective in the shape language that we decided to go with. There's a lot of circular shapes, bouncy shapes, s-curls and switches and a thick black line. That had to do with me wanting to conjure up a Pop aspect, so there's very clear, fun colours that makes it feel inviting, even though part of what we're talking about is something real, like climate change. I wanted the story to feel like it could transport you into a different place. And the characters were fun and inviting. So, look out for circles and bubble shapes on the characters, because that's hopefully what they're supposed to help.”

How did basing the lead characters on your own sibling's impact character design?

“Some of the characters start from a place of people I know. But it helps more with their poses than with their actual character design. Character design is really just supposed to help make it so that you can remember what a character looks like, so giving them a certain colour hair or a certain hairstyle or a certain height will help you differentiate them from the rest of the cast. But what helped with referencing people that I knew was just the personalities, like how does my older sister stand? How does my younger brother stand? How do my younger siblings stand? What does that say about the personalities? How do they walk? How do they get scared? And what does that say? My sister, when she gets scared, it almost feels like she pushes herself more into the front. As a challenge. I remember once when we were younger, and there was a noise coming from outside. We were all terrified, but her instinct was to whip the door open and say “Who's there?” (fiercely). It's about what the characters do in different scenarios that brings up their personalities more than the design.”

Cartoon Network (DStv Channel 301) is available on DStv Premium, Compact Plus, Compact, Family and Access. To upgrade your existing package, click here. Or if you'd like to Get DStv, find a service that suits your needs here.

Watch, laugh and learn with even more children’s shows and movies on DStv

Download the DStv App (Apple, Android or Huawei) or go to https://now.dstv.com/, on your laptop. Your little ones can watch their favourite shows on DStv – just remember to connect to the Wi-Fi first so there are no surprise data costs.

Big Blue creator Gyimah Gariba talks about his favourite sea creatures, basing characters on his siblings, and creating the underwater world of his dreams