Spooky Spectacular: Under Wraps on Disney 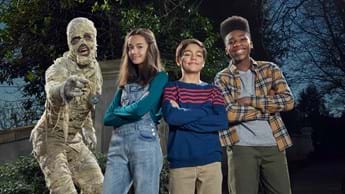 What would you do if an ancient Egyptian nightmare mummy with glaring eyes and rotted bandages started chasing you around a house while roaring and groaning? Well obviously, you smuggle him into your own house...just make sure mom doesn’t find out!

12-year-old horror fan Marshall (Malachi Barton), his best friend, the more cautious Gilbert (Christian J Simon), and the spook-loving new girl at their school, Amy (Sophia Hammons) go from watching scary movies to living in one in the Disney original movie Under Wraps (a reimagining of the 1997 Disney film of the same name).

During the run-up to Halloween, while investigating their neighbourhood creepy guy Mr Kubot (Brent Stait) and his run-down house, the three stumble across an ancient Egyptian sarcophagus in his basement. But when the moonlight hits the mummy’s (dancer and choreographer Phil Wright) amulet, he comes to life determined to find his lost love. The kids’ initial horror and panic turns to curiosity when, instead of going on the rampage and pounding them to dust, the super-strong mummy shows signs of wanting to be friends. And without a common language, they find ways to communicate with this ancient priest – who Marshall nicknames Harold – and help him on his quest. But Mr Kubot wants his mummy back and when his greedy client puts pressure on him, he’ll stop at nothing to get the kids to give up their new friend.

We spoke to Malachi, Christian, Sophia, and Phil along with the movie’s director Alex Zamm to unwrap more fun and spooky facts you can share!

Moms & dads, if you were around 10 years old in 1997, you might have 8-10-year olds of your own now. And this Halloween they’ll be able to see a remake of the Disney original movie, Under Wraps, that you saw at their age.

You worked with a real-life Egyptologist, Kate Liszka. What are some of the things she helped with?

Alex: It's so important for us to be authentic and culturally specific, and to embrace all the things that we can learn about – not just putting artifacts in but making that part of the story feel real. We would know that we needed an amulet, or we needed artifacts in the museum, or ancient hieroglyphs in the back of the amulet. And we would consult with the Egyptologist to make sure that everything we were doing was of this period of the pharaohs. And when we would show them some designs to make sure that they would work.

Often the Egyptologist had wonderful suggestions, and it was really a nice collaboration with them. For example, we had an issue in the script – which I was a co-writer on – and I didn't even know this. We had lids on the sarcophaguses because I had seen old mummy movies, where the lids had hinges. But hinges had not been invented at that period! So how can we make it work with the mummy being exposed to moonlight? When Gilbert goes into the basement, he has to remove the lid by hand, and that adds screen time. Extra things had to be factored in with who's moving what, where, and how it's going to affect everything.

And we did a lot of work with the Egyptologist on translations, like the back of the amulet has a poem. We had to make sure that that would also translate into the proper symbols, and be accurate to the time and translation in case someone blows it up 5,000% to see what it actually says!

In the film there is an Egyptology exhibition at the museum, and it’s likely that the artefacts from the exhibition would have been fully documented and translated. So why do the kids turn to Buzzy (Melanie Brook), who works at the horror shop Ernie’s Eerie Emporium, for help translating Harold’s amulet?

Alex: This is a story about kid empowerment. It’s a world almost like the way the Little Rascals was, or The Goonies. It's a world in which kids turn to each other first. A lot of kids will do that; they don't always turn to adults. They turn to each other, their peers, for help. Now, you could argue that's a missed opportunity, but we never established a friendly Egyptologist at the museum who could give them guidance. But part of the fun of the adventure is seeing the secret life of kids. And in order to be true to that we wanted to make it a kid-centric world.

How do you become Harold?

Phil: The prosthetics take about an hour to get into. We start with the prosthetics on my face, which are silicon. And then just kind of speed through the process because there's like 1000 pieces. Then there's contacts that I have to put in and then there's dentures that I have, a new set of teeth. You also have paint that goes around my eyes. It's detailed down to the last skin molecule. I also have a torso portion of the Harold costume, too, and the bottom portion, my two sets of hands and feet. And then there's a helmet that goes on top of it all. And heaven forbid you have to go and use the restroom. Because if you're caught in that then you have to unzip and untie everything and whatnot.

You’re a choreographer so did you get to contribute to creating Harold’s viral TikTok dance?

Phil: Usually you are just told what to do, but Alex was very welcoming, and he said, “How can we collaborate on this to make this the best dancing ever?” So I was able to implement some physical comedy into the dancing. But we also wanted to stay in the realm of mummyland and make sure that it stayed within the realm of the story. I am so happy that I was able to collaborate with Alex on it.

Harold loves his hot sauce, so what was actually in the hot sauce bottle?

Phil: A lot of hot sauce, if you must know! And it burned my insides very intensively. It hurt my body, inside. (Malachi laughs)

Malachi: When we were in my room during the part where I named Harold, and I introduced him to pizza and hot sauce as well, during one of the takes, Phil puts hot sauce onto the pizza and he goes to eat it. And all of the hot sauce pours into his prosthetic. There was a “bowl” of hot sauce in his chin prosthetic. So he's just sitting there sloshing around…

Did you learn Harold’s dance moves?

Christian: I knew Mr Phil before I started on Under Wraps because I actually used to take his classes. And he's always dancing on set. He would be bored and just start breakdancing all of a sudden. So we learned a couple of moves.

Disney Channel (DStv channel 303) is available on DStv Premium, Compact Plus and Compact. To upgrade your existing package, click here. Or if you'd like to Get DStv, find a service that suits your needs here.

card link
Back to News
Kids 26 October 2021
Spooky Spectacular: Under Wraps on Disney