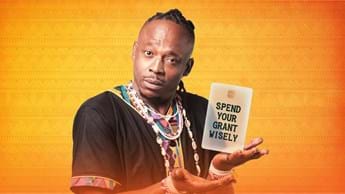 What kind of person steals granny’s pension, or snatches the food out of their own children’s mouths?

Government social grants are meant to help people who are struggling financially to support themselves, or to help those who cannot work, or help themselves at all. So, it’s not just alarming, it’s a crime when someone steals that money, especially someone close to the person who needs it.

To end this injustice, the victims write to Mzansi Wethu’s (DStv Channel 163) intervention series Umndende, and together with host and actor Thabiso Mokhethi, we will see them confront the abusers. “Grant benefactors are given a card from the South African Social Security Agency (SASSA), which they use to withdraw their monthly allowance,” explains Thabiso.

However, the abusers keep the card to themselves. “In most cases, the abusers intercept the grant for unscrupulous means such as partying or paying a loan shark – anything but caring for the person which the grant is meant for,” adds the host.

The end goal in each episode is to ensure that the victim receives what’s rightfully theirs. “More times than not, we’re successful in returning their card. I don’t back down in standing up for the victims,” points out Thabiso, who now tells us more about how challenges these cheats face-to-face in Umndende.

Watch Umndende Season 1 Saturdays at 21:00 on Mzansi Wethu (DStv Channel 163) and on Catch Up

At the start of each episode, Thabiso visits the victim at their home, and he listens to their side of their story. He comes to grips with the plight of the victim’s situation before he brings in the abuser to the conversation. “Having received the information from the victim, I question the abuser. It’s during the chat that I make the victim feel heard while making the abuser realise the extent of their misconduct,” explains Thabiso.

Umndende isn’t about shock value but rather, about holding the abuser accountable. “We often find that the abuser is trying to escape their issues (of poverty and unemployment) by spending a loved one’s grant money on alcohol. But they’re actually creating more problems. The abuser doesn’t understand that the money is meant to improve the victim’s lives, it’s not to be misused.”

Because the abusers have made a habit of getting away with intercepting the victim’s grant, to the point that they now feel entitled to it, they retaliate when they’re challenged. “At first, the abusers are on the offensive and claim that the victim is lying,” says Thabiso.

These abusers then throw tantrums or tell more lies. When the abuser realises that they are cornered, though, they eventually own up to their mistakes. “I make it clear to the abuser that they can no longer violate the victim’s human rights,” adds the host. “We’ve had people who try to leave midway through filming because they are challenged with the ills of their ways. But I convince the abuser to face the truth. In the end, I present positive solutions and when the Umndende crew leaves, the families function better than they did before we arrived.”

Umndende offers the victims and abusers tools to manage their grants and counselling to mend their relationship. “The intervention show works together with the Department of Social Development and SASSA, and they provide us with guidelines. I was taught plenty by the two institutions. One example is that if the grant money is used well, there would be enough for a person to entertain themselves without placing their families in jeopardy,” explains Thabiso.

Before the film crew leave, the production team donates food parcels to the destitute families to help them survive until everything is working again, and they also aid those who’re battling with substance abuse. “Umndende fights on behalf of the marginalised, using the truth, love and the law,” Thabiso insists.

Watch Umndende Season 1 Saturdays at 21:00 on Mzansi Wethu, DStv Channel 163, and on Catch Up

Mzansi Wethu (DStv Channel 163) is available exclusively on DStv Premium, Compact Plus, Compact, Family and Access. To upgrade your existing package, click here. Or if you'd like to Get DStv, find a service that suits your needs here.