ADD Movies to your DStv package for just R49 this September

Enter the Spider-verse when you ADD Movies this September 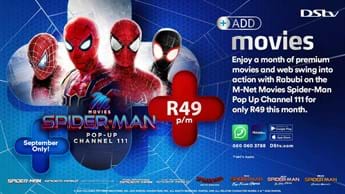 This September when you web-sling into action and ADD Movies to your DStv package for just R49 (yay, half-price!), you’ll be catching Spider-Man in your web. And we mean all nine Spider-Man movies for the past 20 years will be available… J. Jonah Jameson is hammering his desk at the Daily Bugle in a jealous rage!

ADD Movies is the Premium movie going experience, no matter which package you’re on. You can enjoy up to 300 movies a month, including the latest releases from the biggest studios. Whether you love blockbusters, award-winning dramas, animation, comedy, fantasy, action and adventure, it’s all here.

Each month ADD Movies features customised movie curation with themes and festivals to get you in the mood. You can also have it all to yourself or share because ADD Movies is available to watch across multiple devices, whenever, wherever. It’s an uninterrupted movie experience, zero ad breaks.

You could watch it all when you ADD Movies to your DStv Compact Plus, Compact, Family or Access subscription, for just R49 this September. As always, ADD movies is free to Premium subscribers.

Keep reading to see what’s to come this September when you ADD Movies, and get the M-Net Spider-Man Pop Up Channel (DStv Channel 111).

Director Sam Raimi delivers a classic Spidey origin story. Tobey Maguire plays the web slinger as a poor and humble but brilliant teenage student Peter Parker, who gets bitten by a radioactive spider during a school trip, gains superpowers and becomes a neighbourhood vigilante, leading to his clash with masked supervillain The Green Goblin. J.K. Simmons becomes the J. Jonah Jameson by which all other newspaper editors who’re out to unmask Spider-Man will be judged.

Marc Webb’s second Spidey story takes place two years after the first Amazing film. Peter Parker graduates from high school and he and Gwen Stacy break up. On the down low, Spidey battles new villain Electro (Jamie Foxx), while his old boarding school best friend Harry Osborn (Dane DeHaan) searches for a cure for the genetic disorder that killed his father, believing that Spider-Man’s blood could hold the key.

Spider-Man: Into The Spider-Verse

The Spider-Man films cast their web wide with this brilliant animated movie, set in an alternate universe in which bright teenager Miles Morales (voiced by Shameik Moore) becomes Spider-Man…well, A Spider-Man. There’s also a “real” Spider-Man (voiced by Chris Pine) and soon, thanks to an accident with a machine that connects parallel dimensions, they aren’t the only Spideys. New York City is soon infested with Spider-Men!

The first of the Jon Watts Spider-Man trilogy with Tom Holland playing Peter Parker. This is where Spider-Man blends into the events of the Marvel Cinematic Universe (MCU). Two months after the events of the MCU film Civil War, Spider-Man waits for an assignment from Tony Stark (Robert Downey Jr.) while cracking on with his school work at Midtown High, crushing on MJ (Zendaya), and chasing after weapons trafficker Adrian Toomes (Michael Keaton).

A little death and a resurrection later (in MCU films Infinity War and Endgame), Spider-Man desperately needs a break, and Peter Parker and his friends are headed to Europe on holiday. But there’s no peace for the webbed wonder, as Nick Fury (Samuel L. Jackson) drags him into a battle with Mysterio (Jake Gyllenhaal) and The Elementals.

It’s the third and (so far) final of Jon Watt’s witty Spider-Man films. More MCU characters crossover, including Doctor Strange (Benedict Cumberbatch) and Wong (Benedict Wong) so you know some magic and Multiverse madness is underway. Peter’s life is falling apart thanks to what Mysterio did in the previous film, so he asks Doctor Strange to magic away what people know, but the spell breaks open the Multiverse, allowing visitors from alternate realities into Spidey’s world.

NB! Keep an eye on your DStv TV guide for information on broadcast dates and times on the M-Net Spider-Man Pop Up Channel (DStv Channel 111), between Friday, 23 September and Sunday, 2 October.