What to Watch on DStv Kids in May 2022 | Highlights

5 + 1 must-watch series on DStv for Kids of all ages in May 2022, from Lucas The Spider to The Unstoppable Yellow Yeti, to The Patrick Star Show 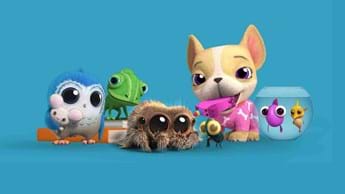 There are adventures, new friends and new ideas waiting for your young ones of all ages on DStv this May.

Anyone can be a hero and tell a story, from the world’s most adorable little spider to a TV obsessed starfish, an adventurous cat, and 2 kids whose BFF is a snow monster, to teens who’re working to create their own graphic novels and gaming YouTube channels. And there are lessons to learn for all ages and stages.

Read on for more about these upcoming series, and a list of the other shows starting this May, including returning shows that are bringing us new episodes.

And remember, your kids might meet some of their favourite characters when they play and learn with DStv Island Adventures, free to all parents via the MyDStv app.

Read about Island Adventures Get the MyDStv app now

An Island of Adventures for kids this May on DStv

This series brings animator Joshua Slice’s adorable YouTube character Lucas the jumping spider into his own series, with some new friends. While the series is about learning those all-important social lessons – with a particular stress on compassion and empathy – it also helps kids to feel less frightened of spiders and other creepy crawlies. And since it takes place in a regular human-sized house, there’s all the fascination of seeing normal everyday places and objects from the point of view of a tiny spider who can jump around from floor to table, to wall and ceiling. For kids aged 3 and up.

This animated series from director Joonas Utti is based on his experiences growing up as a child in rural Finland, when his family played host to a Costa Rican exchange student who opened Joonas’s eyes to what was special about his life. In the story, 12-year-old Osma moves from his beach home to live with his cousin Rita in snowy Winterston, where they befriend a huge yellow yeti named Gustav – despite Rita’s father’s strict No Monsters policy. For children aged 6-10.

Watch The Unstoppable Yellow Yeti Season 1, Mondays-Fridays from Monday, 16 May at 17:15 on Disney Channel (DStv Channel 303).

Patrick is coming to us live from his family home Bikini Bottom, where he’s now hosting his own variety talk show with special guests, including his adopted sister Squidina Star and their pets, Ouchie the sea urchin and Tinkle the toilet. This is great fun for older kids as everything from breakfast TV to ghost hunting shows gets tumbled around through Patrick’s very special brain (hint to your kids to keep an eye on the end credits). PS: Nickelodeon will be dedicating 2-and-a-half hours each day to Patrick Star/Spongebob SquarePants episodes in the run up to the launch of the season.

Live action tween comedy. Milo (Anton Starkman) is the head geek and manager at a popular comic bookstore when his boss hires loud and excitable Ruby (Kate Godfrey). Once they get over their differences, the 2 discover that they can be 1 another’s inspiration, as they bounce ideas off 1 another and start to create the next great graphic novel, along with their friends Hurley (Christopher Martinez) the pizza shop worker, and fashion obsessed Darby (Ariana Molkara). The series is created by Kevin Kopelow & Heath Siefert, the team behind classic 90s comedy series Kenan & Kel, and All That.

The Adventure of Puss In Boots Season 1

The swaggering ginger cat with a hat, boots and a sword from the Shrek films is back with swashbuckling cattitude to protect the hidden village of San Lorenzo after he accidentally breaks the spell that keeps it safe and a secret from the outside world. Puss is determined to restore the spell so he can return to the arms of his new love, the beautiful Dulcinea. In the meantime, he’ll bound around having adventures in the town and meeting its bizarre inhabitants.

In My Parents’ Garage Season 1

Live action tween comedy. Teens Jesse (Jesse Sukunda), Julia (Julia Schwartz) and Ian (Ian Duchene) team up to create The Gaming Show YouTube channel in Ian’s parents’ garage, complete with (real) celebrity interviews and game reviews. The series is filled with fun “what if” segments that take video gaming conventions into the real world for a laugh. Aside from just being a fun story, the series drops hints on creating more effective online content and encourages tweens to go all out and do their own thing.

Also coming up for kids on DStv this May

To upgrade your existing package, click here. Or if you'd like to Get DStv, find a service that suits your needs here.

Download the DStv App (Apple, Android or Huawei) or go to https://now.dstv.com/, on your laptop. Your little ones can watch their favourite shows on DStv – just remember to connect to the Wi-Fi first so there are no surprise data costs.