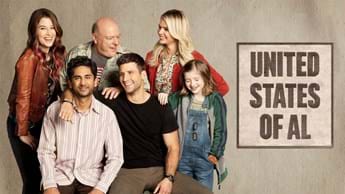 American actor Parker Young and Durban-born Adhir Kalyan (son of politician Santosh Vinita "Sandy" Kalyan) place a new spin on the classic buddy comedy in the sitcom United States of Al, in which they play US military veteran Riley and his former Afghan interpreter Al, who both feel like strangers to life in the USA as they deal with PTSD and, in Al’s case, the loss of home and family.

“The brotherhood that they share is unique to that time and space, and those extraordinary circumstances. This friendship is so important because Al is now here as an interpreter to help interpret Riley's actions and behaviours to his family, to help bridge that gap. And in turn, Riley is there to help guide and lead Al toward a better understanding of what life in America is going to be like, with all of the beautiful things and some of the challenges that he will discover along the way,” explains Adhir.

Back in April 2021, we asked Adhir and Parker about the comedy’s roots in the No One Left Behind Project, seeing America through Al’s eyes, and more.

No One Left Behind

In preparing for the series, did you get to speak to anyone from No One Left Behind?

Parker: We’ve spoken with Janis Shinwari himself, the guy who helped create No One Left Behind. His story is so incredibly moving. Janis was an interpreter in Afghanistan. And he, through the Special Immigrant Visa Programme, came to the United States. A GoFundMe had been started on his behalf to help him to raise $35,000 so that he could start this new life. And he said, “Take this money back, and let's help the thousands of other interpreters who are still waiting to be here, who deserve to be here”.

Adhir: It's been wonderful to get a sense as to what life was like for the interpreters in Afghanistan, and the moral obligation that we now have. We said, “Serve alongside us and at the end of this, we will offer you a special immigrant visa so that you can begin the next chapter of your life in safety in the United States”. Now 17,000 Afghan interpreters are still waiting for their SIV (Special Immigrant Visa). So hopefully we can not only entertain people, but shed light on an important issue. (The deadly consequences of SIV delays later became world news during the fall of Kabul in August 2021).

What was an early key scene that you filmed together as Riley and Al, and what did you want to get across in that moment?

Parker: The scene where I throw you the juice box and we talk about you having basically just arrived. We have our first moment alone in the garage catching up, talking about your family and talking about how Lizzie lost her fiancé. That kind of real moment. The point of that scene is to show 2 men from 2 very different walks of life, who are bonded like brothers because of the experiences that they've gone through together.

Adhir: I remember thinking there is such an ease between the 2 of us that you can't really script. Then a few weeks ago, Parker and I met a Marine named Dave Kinsler and his former interpreter, Wahid, who’s lived with David’s family for 7 years now. They go on family vacations together. It was a surreal moment, because when we looked at them, we saw us. And when they looked at us, they saw them.

I was a stranger

Adhir: He's never seen a grocery store with such an abundance of choice. It represents the American way because everything that he could ever imagine is at his disposal for him to purchase. But for all of the opportunity that America presents to Al, there are also some things that feel a little jarring to him. Episode 5 is called Homesick. He starts to realise that the life that he had in Afghanistan will remain in Afghanistan.

Parker: And we have an episode titled Shorts (episode 3) where Al is taken aback by the amount of skin he's seeing, which is a true story from one of our writers. The other thing we learn about him is that he's just fascinated with 1997 Toyota Corollas. In Afghanistan that was like the beacon of success.

Adhir: Yeah, the car buying experience is definitely a unique experience for Al. There are a few catches that he's not quite attuned to at that stage (episode 7). I think the final thing, which has been most interesting to me, is that there is an episode (episode 8) where the family goes on the hunt for a sweet bread called roht. That journey takes us to a place where Al meets a girl who's from an Afghan family. It’s the first time that Al gets to experience someone who is Afghan American, looking at him as having done something wrong.

M-Net (DStv channel 101) is available exclusively on DStv Premium. To upgrade your existing package, click here. Or if you'd like to Get DStv, find a service that suits your needs here.