It’s a kid party at DStv’s School of Laughter, 19-25 November

Watch Descendants: The Royal Wedding, Emily And The Magical Adventure, new episodes of Side Hustle and Looney Tunes Cartoons 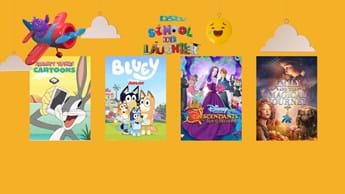 Need to give the kids a break from the year-end crazies? Sit them down with DStv’s School of Laughter for some extra special movies and series this week.

The Disney Descendants franchise gets an animated spin in the Descendants: The Royal Wedding film on Disney’s Channel’s (DStv channel 303) in the Friday afternoon movie slot, and over on Disney Junior (DStv channel 309) the little ones are in for a treat with new episodes of TV’s favourite puppy, Bluey.

M-Net’s (DStv channel 101) Saturday kids friendly blockbuster is Emily And The Magical Journey in which Emily gets transported to a magical world while she’s trying to cheer up her sad mom.

And new episodes of Side Hustle and Looney Tunes Cartoons will also keep them laughing.

Watch and learn with even more children’s shows and movies on DStv.

In this new animated version of Disney’s Descendants, Mal and Ben’s wedding is the biggest event that the Kingdom of Auradon has ever seen, but Hades threatens to ruin it for Mal, leading to a showdown on the Isle of The Lost that could change everything!

Emily And The Magical Journey

A fantasy adventure full of colour and imagination. A young girl trying to cheer up her grieving mother is transported to a magical place where she faces her worst fear. Starring Tipper Seifert- Cleveland, Jenna Lampa and Chelsea Edge.

In new episodes of this Australian animated show in which an enthusiastic Blue Heeler puppy named Bluey go on adventures, her mom tries to prevent her and her sisters from saying the word dunny (toilet) because that’s not a word the Queen of England will use, but the kids try to trick her into saying it instead.

Best friends Lex, Presley and Munchy go on new adventures in new episodes of this live-action kids show, and this time they pose as rat-exterminators at a posh French restaurant.

In new episodes of this reboot of the classic animation, Bugs’s relaxing afternoon is interrupted by a hungry Puma looking for a “hare-y” snack, and Daffy Duck meets his match in an office photocopier.