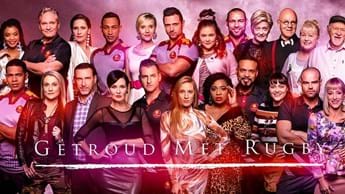 Two intriguing new men are popping up on Getroud Met Rugby this spring.

There’s a buzz in Bibi hive when a charming new hairstylist, Meyer Burger (Stiaan Smith), starts working in the salon Bibi’s. Meyer is single but the big question (as always in Getroud) is which team does he play for? Bibi (Stephanie Petersen), the owner of Bibi’s, and her co-worker, Maryke (Marijke Coetser), are in the dark about Meyer’s sexuality. The clients adore Meyer, but Bibi gets that green-eyed monster this month when some of her regular clients begin to make bookings with Meyer.

Stiaan describes Meyer as intelligent, level-headed and a guy who knows exactly what he wants in life. “Meyer is independent, comfortable in his own skin and knows how to put people at ease.” He is aware of the fact that people question his sexuality. “This is nothing new to Meyer. He enjoys the attention and loves to make them speculate while they try to find out what the truth is,” says Stiaan. It doesn’t bother Meyer when some of Bibi’s clients start to make bookings with him, either. “He knows the thrill will blow over eventually and thinks Bibi will realise soon enough that it can only be beneficial for Bibi’s business.”

Stiaan has proven himself in numerous films like Toorbos (2019) and the drama series Spoorloos: Steynhof (2021), but this is the first time in his career that he is playing a hair stylist, or a gay man. “I think it is important to do research for any new role, especially to the effect that it will add more value to the story,” he says.

Stiaan, who also is a writer at Getroud Met Rugby, says he can identify with Meyer when it comes to his personality and outlook on life. “But I had to do my homework to understand what it is like to be gay man in today’s world, and how it affects your life both on a social and professional level.”

Meyer is single but he is not consciously looking for somebody in his life. “But he will definitely grab the opportunity when the right person comes along,” says Stiaan.

“The first day on set can always be overwhelming,” says Stiaan, “even more so with a soap, where things happen very, very fast. You must get into a new rhythm. If you don’t fall into place, the wave will roll you.”

When Stiaan looks back on his first day on the set of Getroud Met Rugby (which is shot well in advance of its on-air dates), he remembers how friendly and accommodating all the actors were. “And the director, Hannes Müller, made it easier for me to find my feet,” he adds.

A brand-new leaf for Ronnie

Meyer isn’t the only newcomer in town to set tongues wagging. Ronnie (Donovan Pietersen), cousin of the soft-hearted rugby stud Liam Willemse (David Johnson), has recently been released from prison. Ronnie was sentenced to 11 years but eventually served six years behind bars after the police found drugs in the car that he was driving. The car belonged to Liam, who wasn’t a passenger at the time.

Ronnie has suspected all these years that the drugs were planted to frame him. “His life and future career were destroyed. He had dreams to be an attorney and was studying law during the time of his arrest. He was engaged and his fiancée left him after he was convicted,” warns Donovan.

Ronnie is now eager to start a new life. He recently moved in with Liam and Candice (Claudia Jones), Liam’s bubbly wife. Candice was initially hesitant to let an ex-convict live under her roof, but she soon warms to Ronnie. “They get on like a house on fire,” says Donovan. She helps him to look for a new job and get his cv updated, and when he lands a job as a cleaner at the stadium, she takes him shopping for new clothes. Liam is a bit taken aback by his wife and his cousin’s new blooming friendship but asks no questions.

A bomb drops a few weeks after Ronnie’s new appointment when he finds drugs in Liam’s locker. He first takes his findings to coach Schalk Brand (Johan Scholtz). Schalk starts to investigate the situation and eventually calls Liam in for a chat, after which Liam gets fired. “To add insult to injury, the news website SinBin splashes the whole unpleasant incident and it puts Liam as well as the Stryders in a very bad light,” says Donovan.

But who is the real culprit, and will the truth eventually be revealed? How pure are Ronnie’s intentions and would he betray his own flesh and blood? Keep watching.

KykNET (DStv channel 144) is available on DStv Premium and Compact Plus. To upgrade your existing package, click here. Or if you'd like to Get DStv, find a service that suites your needs here.

DStv offers an online streaming service for all DStv subscribers. Watch the channels you watch on your decoder at home, but on the Internet! Sign up at now.dstv.com on your laptop and start watching today.