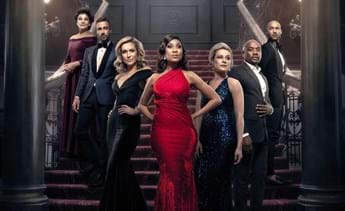 Our local telenovelas are going all out this week to celebrate milestones. For Legacy it’s the massive S1 finale cliffhanger (S2 starts on Monday, 20 September), and Gomora boasts a dramatic and suspenseful 100th episode.

Other Mzansi stories worth tuning in to include the latest season of polygamy reality series Uthando Nes’thembu, a new season of Aansit with Chef Reuben Riffel, and Idols SA revealing its Top Ten! There’s also a brand-new episode of the heart wrenching and hopeful Dankie Lottland.

All this and a couple of movies, too.

Make yourself at home with DStv’s offering of local series. And for more snack-sized info on DStv’s biggest shows, check out #OhSnack on the DStv YouTube Channel.

In this reality series, polygamist Musa Mseleku and his four wives invite viewers into their homes and their polygamous marriage. In this new season we learn more about their lives, family meetings, road trips and date nights.

The competition is getting tough as the Top 10 singers are announced, and someone’s dream to be the next Idols SA winner comes ever closer. Will they impress the judges ProVerb, Unathi and Randall, or be voted out?

Chef Reuben Riffel judges this cooking competition. Home cooks compete in teams of three to prepare lavish, restaurant-quality three-course meals for Reuben and his guest judge, with a tasty cash prize on offer. But their pickiest judges will be their opponents.

Watch VIA Set a reminder

In a new episode of this charity reality show, Huis Van Genade, a haven for homeless men in Kimberley, is under the spotlight as singer Willem Botha meets the founders and surprises the residents with a Lottoland gift that gives them new vision and hope.

Dineo confronts Felicity about the death of her father, Dineo’s late husband, Sebastian, and asks whether Felicity had anything to do with it. A terrible accident occurs, and SJ is desperate to keep Petra close and prevent her from leaving for good. Brace yourself for the cliffhanger season finale on Thursday, 16 September. S2 will start on Monday, 20 September.

Themba makes fun of Sne for choosing to rewrite her matric, Zola calls the hitman to confirm if the job is done, but Zola’s hitman chooses the wrong car workshop to take his car to for repairs. And Charleston gets a weird prayer request from Mgedeza, which shakes him to the core.

In the 100th episode on Friday, 10 September, Melusi gets the shock of his life from Gladys after continuously standing up Thathi. Don gives Bongani an impossible ultimatum, and Melusi breaks up with Thathi. This week, a heartbroken Bongani breaks up with Zodwa, and Don gives his crew the last commands as they leave for another heist.

Mantoa must choose between Puleng and Seipati, Phakade crosses a line, and Mpumi faces her day of reckoning. Seipati is hurt when Mandla decides to continue with his plans to renew his vows, and the battle for Mandla’s soul results in dire consequences.

We explore West African food in this upbeat cooking show, hosted by food blogger Winifred Nwania. In this episode, she dives into the most exciting recipes made with ingredients that are simple and accessible, no matter where you are.

For an incredible night of singing, conductor André welcomes onto his stage The Platin Tenors, The Berlin Comedian Harmonists, and sopranos Mirusia Louwerse, Donij van Doorn and Carmen Monarcha.

A woman fights to regain custody of her children after being admitted to a psychiatric hospital because she caught her husband cheating.

In this made for TV movie, a small-town doctor suddenly needs to re-evaluate his life after an illness – and he finds happiness where he least expects it.