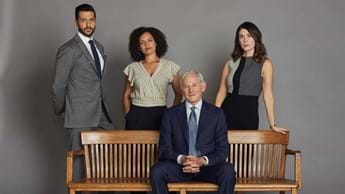 Family Law is a feel-good legal drama series full of hope and humour about one dysfunctional family of lawyers reaching out and helping other dysfunctional families. Series creator and showrunner Susin Nielsen drew on her own life to inspire part of the story: Like the series lead character, Abby (played by Jewel Staite), Susin’s parents divorced when she was young and she didn’t meet her father again, or her half-siblings, until she was in her teens.

DStv spoke with Jewel about collaborating with Susin, their shared sense of humour, and what’s happening in Abby’s mind…

What was one of the key discussions that you had with Susin about Abby?

Jewel: From the very beginning Susin and I had a similar appreciation for Abby in the way that she covers up her pain with humour. In the audition process, Susin appreciated my way of always trying to find the joke, because it can be quite heavy. I felt there was so much room for humour in the way that Abby is forced to interact with these people. She’s this person that blurts things out without thinking them through, and she wears her heart on her sleeve. Susin really appreciated that part.

What do you think it would be like to lose your home and your job over something you no longer have control over, like Abby’s alcoholism?

Jewel: I think Abigail has been living on borrowed time for a long time. She’s been drinking a lot to cover up pain that happened from her childhood and from her marriage falling apart, and it’s basically all catching up with her. I think it was only a matter of time, and I think she knows that too. But to have it fall apart all at once in such a large, devastating way, has been really hard for her to swallow her pride and come back from.

What’s it like for Abigail seeing how her father, Harry (Victor Garber), behaves around the two kids he actually raised?

Jewel: I think it’s really hard for her. She hasn’t seen her father for over 30 years, and she’s not only feeling uncomfortable about being around him, but she’s also having to meet his children from his other marriages for the very first time. So, she’s a fish out of water. She doesn’t know anything about family law; she’s a personal injury lawyer, so she’s having to learn the ropes with that as well. And everybody is looking to her to see what she can do and how she can perform. So, she has all these pressures from all these different angles and at the same time, she sees this bond her father has with his other two children – that she missed out on. So, to temper the pain of that, Abby is trying to cover up and move forward and move on, and prove herself while she’s feeling a lot of hurt.

What’s one of the first moments where Abby gets any sort of family feeling with her half-siblings, Daniel (Zach Smadu) and Lucy (Genelle Williams)?

Jewel: Lucy tries to bond with her pretty quickly. Lucy has always wanted an older sister, so when Abby comes into Lucy’s life – she’s quite a warm person anyway – she latches on to that sisterly relationship and really forces the bond there quite a bit, even though Abby is not as responsive. But Lucy keeps trying and she manages to break down that wall a little bit.

With Daniel it’s a little more difficult because he’s so competitive. Abby is quite good at her job and starts to overshadow him in a lot of ways and gains her father’s approval – and all Daniel wants is his dad’s approval. So, when Abby starts to get that instead of him, he starts to take it personally, and then he takes it out on her quite a bit. But they do come together in a lot of ways as the first season progresses in terms of winning these cases. Abby always fights for the underdog, and I think Daniel learns to appreciate that and fight for the underdog as well, so they bond through the cases as time goes on.

What was it like to have to take a pandemic pause between March and October when you were just two weeks into filming?

Jewel: It was really strange for so many reasons. No one knew the extent of what was happening at first. Maybe this would be just a brief pause? But it ended up being months long and we had all just gotten into our groove, we had all started to get to know each other. Victor Garber had just come out of quarantine because he had to travel to Canada from the USA, so we were really getting started. And to have that yanked from under us was quite a shock. But the network was so supportive and kept saying throughout our shutdown that we would be back, and we would persevere, and they would figure out a way to continue shooting the season. And they did! And did it in such a beautiful way that when we did finally resume filming months later, it did feel like no time had passed. We just picked up where we left off. What was funny was that our (production) bubble had to be small to keep everyone safe. It made us even closer because we were such a small bubble and there was no holding back from anyone.

Finally, what’s it like having Victor Garber as your TV dad?

Jewel (laughing): It’s the best! Victor makes me laugh. He’s a very warm person and cares deeply about the show and feels like he’s always watching out for me. He’s been in the business for many years and looks out for us and protects us and really feels like a father, but he’s also great fun so we’re always dragging him along for a night out in the city. He’s a genuinely kind person, he’s amazing.

Universal TV (DStv channel 117) is available on DStv Premium, Compact Plus, Compact and Family. To get DStv, click here.