SuperSport viewers on DStv can look forward to action from the 2020-21 Premier League, La Liga and Serie A seasons, with matches scheduled for 23 May 2021. 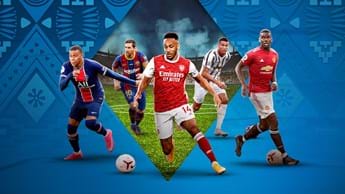 SuperSport viewers on DStv look forward to action from the 2020-21 Premier League, La Liga and Serie A seasons, with matches scheduled for 23 May 2021.

SuperSport is your #HomeOfFootball and the ultimate destination for lovers of ‘The Beautiful Game’.

This weekend sees the Premier League wrap up for this season, with Manchester City celebrating their title triumph with a clash at home to Everton at the Etihad Stadium – though they will surely have one eye on their UEFA Champions League final against Chelsea (who are away to Aston Villa) next weekend in Istanbul.

Only on SuperSport (Channel 203)

"People believe it's easy to arrive in the final of the Champions League. Getting to the final now makes sense of what we have done in the past four or five years,” said City boss Pep Guardiola. "I want to thank the owner, the chairman and the staff at the club. This club is about all the people that work behind the scenes, it's not just about money. If you want to think that then you are wrong."

With the top of the table decided and the three relegation spots also confirmed – with Sheffield United, West Bromwich Albion and Fulham descending to the EFL Championship – attention will be focused on the fight for European places, with the key clashes including Leicester City at home to Tottenham Hotspur.

“We have already beaten our [points] total from last season. We have to embrace the challenge,” said Leicester manager Brendan Rodgers as they look to seal a place in next season’s UEFA Champions League.

Other key matches in this regard see Liverpool at home to Crystal Palace, Chelsea’s aforementioned visit to Birmingham to face Villa, and West Ham United hosting Southampton.

“I said it a couple of times, we are not in dreamland and say everything has to click again,” said Liverpool boss Jurgen Klopp. “It's nothing to do with confidence or whatever. Our situation changed slightly but only for us, for the other teams not too much because they are still in a better position and we know that. The only thing we can do is [keep] winning our games.”

SuperSport is the only place to get English commentary from the legendary La Liga, where the title race has gone down to the wire and will be settled on this final day of the 2020-21 season. Defending champions Real Madrid are at home to Villarreal in one of the key matches, as they look to overcome the ‘Yellow Submarine’ in the Spanish capital.

Only on SuperSport (Channel 204)

“The players just want to win and that's the same in every game, even if sometimes it's not possible. The key thing is to give it our all, 100 percent. That often reaps its rewards and if it doesn't you have to be patient,” said Los Blancos boss Zinedine Zidane. “All I can promise you is that we're going to compete, from minute one to minute 90. Our focus is on this game and finishing the season strongly.”

The second key game in the title race sees Atletico Madrid (who are leading the log and will seal the title with a win) head to Estadio Municipal Jose Zorilla to take on a Real Valladolid side fighting for their lives in the relegation zone. “We will keep working and believing right to the final minute of the final game of the season,” said Rojiblancos boss Diego Simeone. “All we can do is control our own results and be sure that we end the season with pride in ourselves and our efforts.”

Barcelona would have been hoping to be in the title frame, but a recent dip in form means they are now hoping to merely defend third place from Sevilla. The Blaugrana end the season away to already-relegated Eibar, while Los Nervionenses are at home to Deportivo Alaves (who have only just secured survival).

The final two relegation spots – to decide who joins Eibar in dropping to the second tier for next season – will be the key focus for Real Valladolid (in their match against Atletico), Elche in hosting Athletic Bilbao and Huesca, who are just above the red zone, for a home game with Valencia.

This weekend sees the 2020-21 Serie A season come to a close, with new champions Internazionale looking to end their campaign in style with a win at home to Udinese. “I think the work we’ve done over two years has made a big difference, as the squad improved not only on the pitch, but also in terms of transfer value. The team is now considerably more valuable than it was when I took over, and so I think investing in my experience has paid off,” said manager Antonio Conte.
Visit SuperSport

“I always knew my arrival would bring certain expectations. I feel those expectations have now been met. These lads can still grow further, they can improve in terms of mentality especially, but they are winners and they know what it is they have to do. I always said victory has to become an obsession for a winner, like a drug that they need.”

The race for the final three places in next season’s UEFA Champions League is the main focus for this final round of games, with Napoli, Atalanta, Juventus and Milan fighting for a place at the top European table in 2021-22.

The key game sees Atalanta host Milan at the Gewiss Stadium in Bergamo, with La Dea looking to continue their recent dominance over the Rossoneri, which includes a 3-0 away win – with goals from Cristian Romero, Josip Ilicic and Duvan Zapata – when the teams met earlier this season.

“Our fate is in our hands and the best way to avoid looking over our shoulders is to keep pushing forward. It’s time to play and give our absolute best,” said Atalanta boss Gian Piero Gasperini.

Elsewhere, Napoli will be at home to Hellas Verona, while Juventus face a trip to Stadio Renato Dall’Ara to face Bologna – neither Verona nor Bologna have anything but pride to play for, so the two heavyweights will feel confident of claiming all three points.

There will also be major interest in the relegation battle: Crotone and Parma will be descending to Serie B, but which team will join them? The crunch game sees Torino host Benevento at Turin’s Stadio Olimpico. Il Toro may be safe and clear if they can avoid a defeat against Lazio in a midweek catch-up game, but otherwise they will be scrapping for their lives come Sunday.

No rival can compete with SuperSport’s coverage. Our viewers on DStv can see all their favourite stars from the African continent dominating in leagues across Europe.

Don’t miss the 2020-21 football season on SuperSport on DStv. Join in on the excitement. And while you’re on the move, you can stream matches on the DStv App.

Serie A fixtures and broadcast details, 23 May 2021

The cast heal from their past marriages in episode 7 of The Single Wives SA.